The petrostate of America

The energy boom is good for America and the world. It would be nice if Barack Obama helped a bit 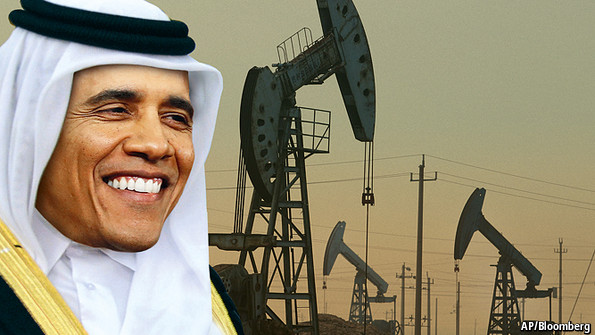 “RISE early, work hard, strike oil.” The late oil baron J. Paul Getty’s formula for success is working rather well for America, which may already have surpassed Russia as the world’s largest producer of oil and gas (see article). By 2020 it should have overtaken Saudi Arabia as the largest pumper of oil, the more valuable fuel. By then the “fracking” revolution—a clever way of extracting oil and gas from shale deposits—should have added 2-4% to American GDP and created twice as many jobs than carmaking provides today.

All this is a credit to American ingenuity. Commodities have been a mixed blessing for other countries (see our leader on Argentina). But this oil boom is earned: it owes less to geological luck than enterprise, ready finance and dazzling technology. America’s energy firms have invested in new ways of pumping out hydrocarbons that everyone knew were there but could not extract economically. The new oilfields in Texas and North Dakota resemble high-tech factories. “Directional” drills guided by satellite technology bore miles down, turn, bore miles to the side and hit a target no bigger than a truck wheel. Thousands of gallons of water are then injected to open hairline cracks in the rock, and the oil and gas are sucked out.

From the point of view of the rest of the world, the new American petrostate is useful. Fracking provides a source of energy that is not only new but also relatively clean, cheap and without political strings. It should reduce the dependence on dirty fuels, such as coal, and extortionate suppliers, such as Russia. Moreover, fracking is unusually flexible. Setting up an oil rig in the Gulf of Mexico can take years. But America’s frackers can sink wells and start pumping within weeks. So if the oil price spikes, they drill more wells. If it falls, they let old ones run down. In theory, fracking should make future oil shocks less severe, because American producers can respond quickly.

Fracking all over the world

Some foreign-policy wonks argue that this dramatic change in America’s fortunes argues for a fundamental change in the country’s foreign policy. If America can produce its own oil, they argue, why waste so much blood and treasure policing the Middle East? Yet even if it were politically sensible for America to disengage from the world—which this newspaper does not believe it is—the economic logic is flawed. The price of oil depends on global supply and demand, so Middle Eastern producers will remain vital for the foreseeable future. It is in the superpower’s interest to keep Gulf sea lanes open (and not to invite China to do the job instead).

Although America’s foreign policy should not change, its energy policy should. Its ban on the export of crude oil, for instance, dating from the 1970s, was intended to secure supplies for American consumers. But its main effect is to hand a windfall to refiners, who buy oil cheaply and sell petrol at the global price. Barack Obama should lift it so that newly fracked oil can be sold wherever it makes the most cash. And he should approve the Keystone XL pipeline, which would carry oil from Canada’s tar sands to American refineries; an exhaustive official study has deemed the project environmentally sound.

America does not ban the export of natural gas, but it makes getting permits insanely slow. Fracking has made gas extraordinarily cheap in America. In Asia it sells for more than triple the price; in Europe, double. Even allowing for the hefty cost of liquefying it and shipping it, there are huge profits to be made from this spread. The main beneficiaries of the complicated export-permit regime are American petrochemical firms, which love cheap gas and lobby for it.

Mr Obama should ignore them. Gas exports could generate tankerloads of cash. To the extent that they displace coal, they would be good for the environment. And they could pay foreign-policy dividends, such as offering Europeans an alternative to Russian gas and so reducing Vladimir Putin’s power to bully his neighbours. Allowing exports might cause America’s domestic gas prices to rise a little, but it would also make American frackers pump more of it, cushioning the blow.

A world in which the leading petrostate is a liberal democracy has much to recommend it. But perhaps the biggest potential benefit of America’s energy boom is its example. Shale oil and gas deposits are common in many countries. In some they may be inaccessible, either because of geology or because of environmental fears: but in most they go unexploited because governments have not followed America’s example in granting mineral rights to individual landowners, so that the communities most disrupted by fracking are also enriched by it. Become a champion of a global fracking revolution, Mr Obama, and the world could look on America very differently.

From the print edition: Leaders