The Democratic Civil War Over Energy

Green demands to stop drilling for natural gas come at an awkward time for Obama and his party.

The environmental left is seeing Democrats the Keystone XL pipeline, and raising them natural-gas exports. The question of who folds on this issue will play big in this midterm election year.

A split is growing in the Democratic Party, one that ought to rival the divisions on the right that the headlines trumpet. Greens are increasingly bitter about President Obama —annoyed that he’s dropped climate legislation, scaled back green subsidies, ignored fracking. They’ve channeled their frustration into the fight against Keystone, warning that they’ll turn their significant money and resources against Mr. Obama’s party if the president approves more “dirty oil.” Since this president cares about nothing so much as winning elections, he’s sat on the pipeline for five years.

Emboldened, the eco-warriors are now dramatically upping the stakes, demanding that Democrats turn against the natural-gas revolution that has propped up the Obama economy. More than a thousand activists flooded last month to a Keystone-like rally protesting Cove Point, a Maryland facility that is due to be the first to export liquefied natural gas. The Ukraine crisis and calls for greater gas exports have given the issue a big new lift. On Wednesday 16 prominent green groups sent an open letter to Mr. Obama demanding he essentially shut down Cove Point. 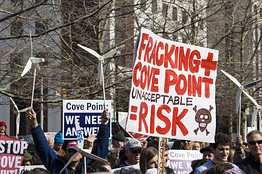 The letter was revealing for its honesty. Not so long ago enviros endorsed natural gas as a cleaner alternative to coal or oil. Most limited themselves to calling for “better” industry practices, or to solely opposing exports. But as the gas rush has grown, threatening their solar-and-windmill nirvana, greens now openly decry drilling, chiding Mr. Obama for his “support for hydraulic fracturing” and calling on him to keep “our nation’s fossil fuel reserves in the ground.” The letter was signed by Bill McKibben, the director of the anti-Keystone outfit 350.org, as well as directors of nearly every major green shop in the country—the Sierra Club, the Center for Biological Diversity, CREDO and Earthjustice.

This new demand could not come at a more awkward time for the party. Under fire for ObamaCare and the economy, scores of vulnerable Democrats are rushing to natural gas and drilling as political safe harbors. Supporting fracking allows them to claim they are in favor of more jobs, cheaper energy and rising incomes. Supporting natural-gas exports allows them to look responsive to the Ukraine crisis, or at least more responsive than their unpopular president. It helps, too, that this puts them on the same page as the significant majority of Americans who support more drilling (and pipelines).

Red-state senate Democrats like Mary Landrieu (La.) and Mark Pryor (Ark.) are these days fighting for pro-energy airtime with colleagues like Colorado’s Mark Udall. Mr. Udall, who can usually be found pushing a federal renewable energy mandate, now finds himself facing a likely challenge from Rep. Cory Gardner —as pro-energy a Republican as they come. When the Ukraine crisis began, Mr. Udall suddenly couldn’t move quickly enough to introduce a bill to expand the number of countries to which the U.S. can export natural gas. A Udall spokesman publicly bragged that they’d got their own bill introduced before Mr. Gardner introduced his own.

Virginia Sen. Mark Warner, who just loves solar, wind and biofuels, but who is also facing an electoral threat from Republican Ed Gillespie, materialized on Wednesday to demand that the Obama Energy Department greenlight more gas export terminals. New Mexico’s Tom Udall has embraced more exports, tying it directly to his state’s drilling jobs. With all this Democratic love for natural gas, Ms. Landrieu was hard pressed to get attention for her own announcement that she is devoting her first hearing as new chairman of the Senate Energy and Natural Resources Committee to the benefits of more oil and gas exports.

All this comes on top of the 11 Senate Democrats and 69 House Democrats who have previously voted for Keystone, and the 26 House Democrats who late last year voted to speed approvals of natural gas pipelines. House Republicans intend to hold a vote on Mr. Gardner’s bill to expedite approval of export terminals. Expect a significant Democratic turnout.

Green groups have mostly avoided targeting vulnerable Democrats; even billionaire Tom Steyer backed away from suggestions he might go after Ms. Landrieu on climate change. But this restraint is partly due to the fact that the White House hasn’t openly defied him on Keystone.

The left’s new fracking demand is not so easily avoidable. The White House is technically in favor of natural gas, has reaped its environmental and economic upside, and its candidates are coalescing around drilling and export expansion. The president’s green troops now demand an end to this. To crack down on fracking would be economically and politically dumb. Not cracking down risks tipping his green base over the edge.

Mr. Obama has for years politically danced around the U.S. natural gas boom, but Mr. McKibben & Co. are now forcing the issue. The president may not be able to punt on this one.