A giant solar-power project officially opening this week in the California desert is the first of its kind, and may be among the last, in part because of growing evidence that the technology it uses is killing birds.

The $2.2 billion solar farm, which spans over five square miles of federal land southwest of Las Vegas, includes three towers as tall as 40-story buildings. Nearly 350,000 mirrors, each the size of a garage door, reflect sunlight onto boilers atop the towers, creating steam that drives power generators.

The owners of the project— NRG Energy Inc., NRG +1.07% Google Inc. GOOG -0.96% and BrightSource Energy Inc., the company that developed the “tower power” solar technology—call the plant a major feat of engineering that can light up about 140,000 homes a year. 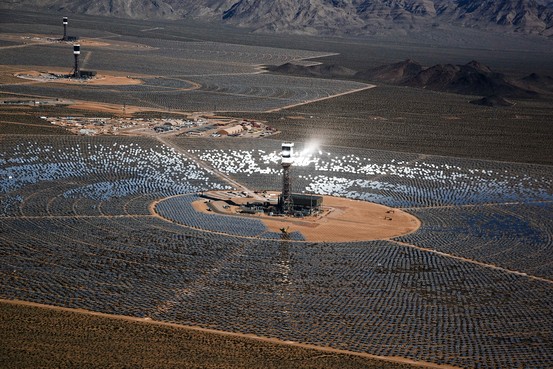 Ivanpah is among the biggest in a spate of power-plant-sized solar projects that have begun operating in the past two years, spurred in part by a hefty investment tax credit that expires at the end of 2016. Most of them are in California, where state law requires utilities to use renewable sources for a third of the electricity they sell by 2020.

Utilities owned by PG&E Corp. and Edison International have agreed to buy electricity generated from the Ivanpah plant under 25-year contracts, according to NRG.

Utility-scale solar plants have come under fire for their costs–Ivanpah costs about four times as much as a conventional natural gas-fired plant but will produce far less electricity—and also for the amount of land they require.

That makes for expensive power. Experts have estimated that electricity from giant solar projects will cost at least twice as much as electricity from conventional sources. But neither the utilities that have contracted to buy the power nor state regulators have disclosed what the price will be, only that it will be passed on to electricity customers. 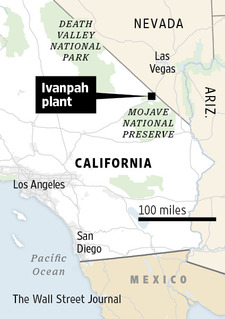 New utility-scale projects began operating at a record rate in the fourth quarter of 2013, adding 1,141 megawatts of capacity, according to research firm SNL Energy. But only a handful of new projects were announced, totaling 13 megawatts.

BrightSource wants to build a second tower-based solar farm in California’s Riverside County, east of Palm Springs. But the state Energy Commission in December proposed that the company instead use more conventional technologies, such as solar panels or mirrored troughs.

One reason: the BrightSource system appears to be scorching birds that fly through the intense heat surrounding the towers, which can reach 1,000 degrees Fahrenheit.

The company, which is based in Oakland, Calif., reported finding dozens of dead birds at the Ivanpah plant over the past several months, while workers were testing the plant before it started operating in December. Some of the dead birds appeared to have singed or burned feathers, according to federal biologists and documents filed with the state Energy Commission. 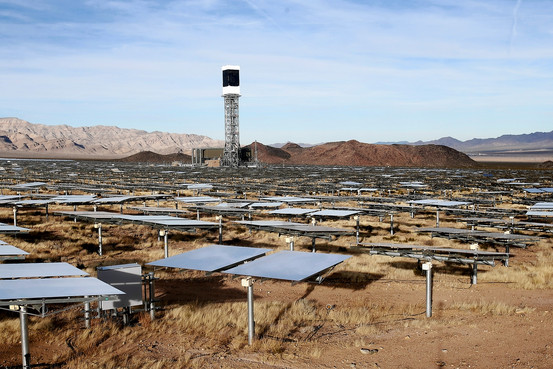 Mirrors reflect sunlight on to boilers atop the Ivanpah facility’s towers to create steam for generating power. The Washington Post/Getty Images

Regulators said they anticipated that some birds would be killed once the Ivanpah plant started operating, but that they didn’t expect so many to die during the plant’s construction and testing. The dead birds included a peregrine falcon, a grebe, two hawks, four nighthawks and a variety of warblers and sparrows. State and federal regulators are overseeing a two-year study of the facility’s effects on birds.

“With the data we’ve gathered, it’s far too early in the process to draw any definitive conclusions about long-term impacts on avian or other species,” said Jeff Holland, a spokesman for NRG, the project’s operator, which is based in Princeton, N.J.

BrightSource has “confidence in the technology and its ability to operate and perform as expected,” said Joe Desmond, a spokesman for the company, adding that he thinks it will be able to resolve the problem of bird deaths and build more big plants in California and elsewhere.

The solar-technology company, which remains closely held after canceling a planned public offering in 2012, intends to use its technology in China and other countries, Mr. Desmond said.

Facts about the Ivanpah project

The company put plans for a third California solar farm on indefinite hold last year, and it abandoned a proposed fourth project for which it had sought state approval in 2011.

In response to BrightSource’s blueprint for its second big solar farm in Riverside County, near Joshua Tree National Park, biologists working for the U.S. Fish and Wildlife Service told state regulators that they were concerned that heat produced by the project could kill golden eagles and other protected species.

“We’re trying to figure out how big the problem is and what we can do to minimize bird mortalities,” said Eric Davis, assistant regional director for migratory birds at the federal agency’s Sacramento office. “When you have new technologies, you don’t know what the impacts are going to be.”

The agency also is investigating the deaths of birds, possibly from colliding with structures, found at two other, unrelated solar farms. One of those projects relies on solar panels and the other one uses mirrored troughs. Biologists think some birds may have mistaken the vast shimmering solar arrays at all three installations for a lake and become trapped on the ground after landing.

Another concern about the second BrightSource project involves the height of the towers, which would be 750 feet tall, roughly the same as a 69-story building. Indian tribes have objected to the project, saying the tall towers and the light emitted from the facility’s mirrors would be visually obtrusive.

The Ivanpah plant draws water for the boilers atop its towers, and for washing its many thousands of mirrors, from underground wells at the site. The water will be recycled; an on-site treatment plant will filter out wastewater sludge, which a waste hauler will remove and dispose of, according to the company.

The plant was more expensive to build than a similar-size conventional solar-power plant would be today, particularly as prices for solar panels, a rival technology, have fallen over the past few years. Many of the solar power facilities currently being developed are smaller than the Ivanpah plant, such as rooftop solar panel installations and solar farms built near cities and towns where there is less space available.