Will Obama use two small birds to limit oil drilling in the West?

Almost half the land west of the Mississippi belongs to the federal government, including 48% of California, 62% of Idaho and 81% of Nevada. No surprise that the Obama Administration wants to control more. But the result could be to suppress the country’s booming oil and gas development.

In partnership with green activists, the Department of Interior may attempt one of the largest federal land grabs in modern times, using a familiar vehicle—the Endangered Species Act (ESA). A record 757 new species could be added to the protected list by 2018. The two species with the greatest impact on private development are range birds—the greater sage grouse and the lesser prairie chicken, both about the size of a barnyard chicken. The economic stakes are high because of the birds’ vast habitat.

Interior is expected to decide sometime this month whether to list the lesser prairie chicken, which inhabits five western prairie states, as “threatened” under the Endangered Species Act. Meantime, the Bureau of Land Management and U.S. Forest Service are considering land-use amendments to protect the greater sage grouse, which would lay the groundwork for an ESA listing next year. 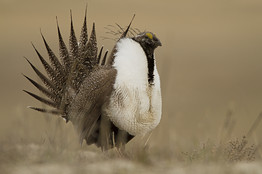 However, much of the prairie chicken population and some sage grouse are on private property that could become subject to some of the most invasive private land-use rules and property acquisitions in the history of the protected-species law. The birds’ habitat includes an estimated 50 million to 100 million acres of federal and private land, according to the federal Natural Resources Conservation Service.

Environmental groups have won victories by using a strategy called “sue and settle” under which groups propose species for protected status and then sue the federal government, which settles the lawsuit on terms favorable to the greens rather than fight. These settlements typically bypass a thorough review of the scientific evidence and exclude affected parties, such as industry and local communities.

Interior’s proposed “land use” amendments are draconian. They require a four-mile “buffer zone” whenever a sage-grouse mating ground is discovered on federal land. The American Petroleum Institute calls the proposed rules a “de facto ban on drilling.” It fears that compliance could cost tens of millions of dollars in legal fees and cause years of drilling delays.

Huge swaths of land that would go off limits to development are some of the nation’s most productive oil and gas fields. The prairie chicken sits atop Texas’s Permian Basin oil bonanza, and the sage grouse is near the Bakken Shale in North Dakota. An Interior Department report describes the impact on the sage grouse of oil and gas operations as “universally negative and typically severe,” even though modern horizontal drilling leaves a much smaller footprint than in the past.

Most western states have conservation efforts underway to head off federal listings. No less a liberal than Senate Majority Leader Harry Reid said in December that an ESA listing for the grouse “will have major ramifications on rural life and the economies in Nevada and throughout the west.” Mr. Reid has proposed alternative grouse restoration measures in Nevada with fellow Senator Dean Heller.

In November, Colorado Governor John Hickenlooper asked the Obama Administration not to list the greater sage grouse because of the potential economic harm. The Democrat earlier this year also sent a letter to the Bureau of Land Management challenging its proposed protections as unscientific and offering a more flexible approach. West Texas energy developers and farmers have contributed $15 million to a prairie chicken protection fund. However, green groups say anything short of an ESA listing is insufficient.

Colorado Senator Mark Udall has been pushing Interior to delay the sage grouse decision, perhaps with his difficult re-election campaign in mind. The Administration may oblige to keep the Senate, but Democrats ought to declare themselves on the larger green strategy of using lawsuits and regulation to kill jobs and economic development.

It was probably inevitable that the Obama Administration’s alliance with greens would come into direct conflict with the economic boon the West is enjoying from shale gas and oil development. The Interior Department may say the ESA requires protection for the sage grouse and prairie chicken, but the damage to human beings would be enormous.