Every year environmental groups celebrate a night when institutions in developed countries (including my own university) turn off their lights as a protest against fossil fuels. They say their goal is to get America and Europe to look from space like Africa: dark, because of minimal energy use.

But that is the opposite of what’s desired by Africans I know. They want Africa at night to look like the developed world, with lights in every little village and with healthy people, living longer lives, sitting by those lights. Real years added to real lives should trump the minimal impact that African carbon emissions could have on a theoretical catastrophe.

I’ve spent my life on the foreign-policy left. I opposed the Vietnam War, U.S. intervention in Central America in the 1980s and our invasion of Iraq. I have headed a group trying to block U.S. arms and training for “friendly” dictators, and I have written books about how U.S. policy in the developing world is neocolonial. 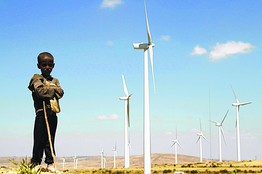 A boy stands in front of wind turbines at the Ashegoda Wind Farm,

But I oppose my allies’ well-meaning campaign for “climate justice.” More than 230 organizations, including Africa Action and Oxfam, want industrialized countries to pay “reparations” to African governments for droughts, rising sea levels and other alleged results of what Ugandan strongman Yoweri Museveni calls “climate aggression.” And I oppose the campaign even more for trying to deny to Africans the reliable electricity—and thus the economic development and extended years of life—that fossil fuels can bring.

The left wants to stop industrialization—even if the hypothesis of catastrophic, man-made global warming is false. John Feffer, my colleague at the Institute for Policy Studies, wrote in the Dec. 8, 2009, Huffington Post that “even if the mercury weren’t rising” we should bring “the developing world into the postindustrial age in a sustainable manner.” He sees the “climate crisis [as] precisely the giant lever with which we can, following Archimedes, move the world in a greener, more equitable direction.”

I started to suspect that the climate-change data were dubious a decade ago while teaching statistics. Computer models used by the U.N. Intergovernmental Panel on Climate Change to determine the cause of the six-tenths of one degree Fahrenheit rise in global temperature from 1980 to 2000 could not statistically separate fossil-fueled and natural trends.

Then, as now, the computer models simply built in the assumption that fossil fuels are the culprit when temperatures rise, even though a similar warming took place from 1900 to 1940, before fossil fuels could have caused it. The IPCC also claims that the warming, whatever its cause, has slightly increased the length of droughts, the frequency of floods, the intensity of storms, and the rising of sea levels, projecting that these impacts will accelerate disastrously. Yet even the IPCC acknowledges that the average global temperature today remains unchanged since 2000, and did not rise one degree as the models predicted.

But it is as an Africanist, rather than a statistician, that I object most strongly to “climate justice.” Where is the justice for Africans when universities divest from energy companies and thus weaken their ability to explore for resources in Africa? Where is the justice when the U.S. discourages World Bank funding for electricity-generation projects in Africa that involve fossil fuels, and when the European Union places a “global warming” tax on cargo flights importing perishable African goods? Even if the wildest claims about the current impact of fossil fuels on the environment and the models predicting the future impact all prove true and accurate, Africa should be exempted from global restraints as it seeks to modernize.

With 15% of the world’s people, Africa produces less than 5% of carbon-dioxide emissions. With 4% of global population, America produces 25% of these emissions. In other words, each American accounts for 20 times the emissions of each African. We are not rationing our electricity. Why should Africa, which needs electricity for the sort of income-producing enterprises and infrastructure that help improve life expectancy? The average in Africa is 59 years—in America it’s 79. Increased access to electricity was crucial in China’s growth, which raised life expectancy to 75 today from 59 in 1968.

According to the World Bank, 24% of Africans have access to electricity and the typical business loses power for 56 days each year. Faced with unreliable power, businesses turn to diesel generators, which are three times as expensive as the electricity grid. Diesel also produces black soot, a respiratory health hazard. By comparison, bringing more-reliable electricity to more Africans would power the cleaning of water in villages, where much of the population still lives, and replace wood and dung fires as the source of heat and lighting in shacks and huts, removing major sources of disease and death. In the cities, reliable electricity would encourage businesses to invest and reinvest rather than send their profits abroad.

Mindful of the benefits, the Obama administration’s Power Africa proposal and the World Bank are trying to double African access to electricity. But they have been hamstrung by the opposition of their political base to fossil fuels—even though off-grid and renewable power from the sun, tides and wind is still too unreliable, too hard to transmit, and way too expensive for Africa to build and maintain as its primary source of power.

In 2010 the left tried to block a World Bank loan for a new coal-fired plant in South Africa. Fortunately, the loan was approved (with the U.S. abstaining). The drive to provide electricity for the poor has been perhaps the greatest achievement of South Africa’s post-apartheid governments.

Standing on the mountainside at night in Cape Town, overlooking the “Coloured” township of Mitchell’s Plain and the African township of Khayelitsha, you can now see a twinkling blanket of bulbs. How terrible to think that so many people in the West would rather block such success stories in the name of unproved science.

Mr. Rossiter directs the American Exceptionalism Media Project. He is an adjunct professor at American University and an associate fellow at the Institute for Policy Studies.