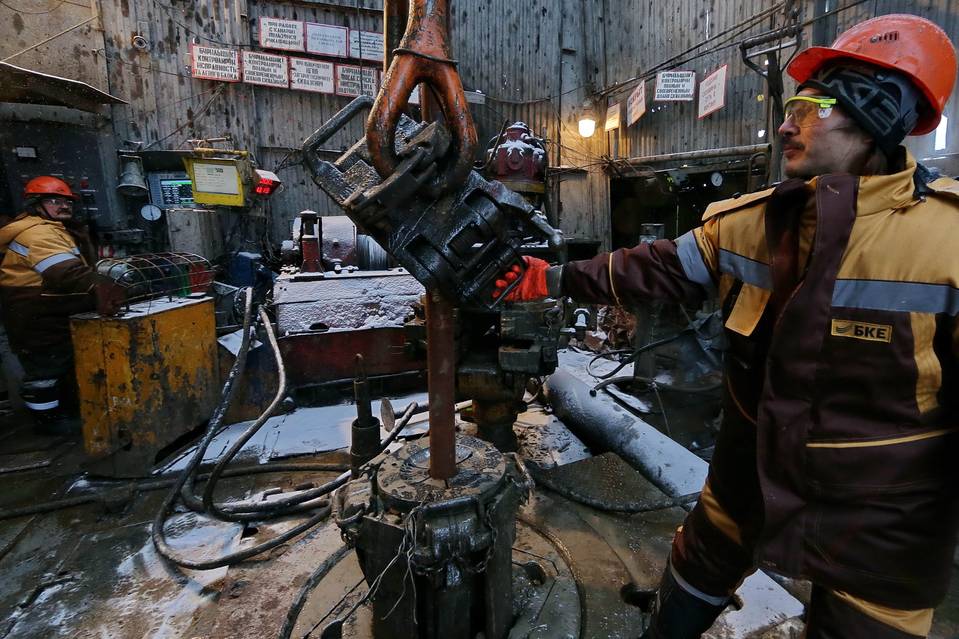 A man works a drilling rig in the Khanty Mansiysk region of West Siberia in Russia.
Photo: Smirnov Vladimir/TASS/Zuma Press
By Selina Williams and James Marson

IMILOR OIL FIELD, Russia—In the frosty swamplands of West Siberia, the drilling rigs of oil giant OAO Lukoil are helping raise Russia’s oil output to its highest levels since the breakup of the Soviet Union a quarter century ago.

While recent increases in Russian oil output have helped cushion the sharp price fall, Mr. Putin is so squeezed for cash, his government postponed a planned reduction in oil-export duties this year. Executives say they fear the postponement could be extended, diverting money to Moscow that could be invested in new drilling and exploration to supplement aging oil fields.

“We will have to limit our spending and that will lead to a fall in production,” Lukoil Chief Executive Vagit Alekperov said in an interview at the Russian company’s international headquarters in Vienna.

Russian officials acknowledged that the higher-than-planned taxes could lead to a decrease in investment and production, but said they were needed for the budget.

U.S. and European sanctions over the past 18 months also weigh on Russia’s future prospects by choking Western financing for exploring potential finds in the Arctic Ocean and for tapping Siberian shale formations.

Oil and natural gas revenues make up about half of Russia’s federal government revenue, and exports account for one-third of national output. Energy revenues are central to Mr. Putin’s power as he faces off with the West over Ukraine and the 2014 annexation of Crimea. He has deployed military forces in Syria’s war to back President Bashar al-Assad.

Mr. Putin oversaw rapid expansion of an oil industry crippled by the fall of the Soviet Union. Production in Russia fell as low as 6.1 million barrels a day in 1996, compared with a Soviet-era high of 11.4 million a day in 1987.

As oil prices and production rose in the 2000s, Mr. Putin expanded social spending to improve Russian living standards, cementing his position as an autocrat and winning approval ratings that at times exceeded 80%.

Mr. Putin said at the end of last year that the price of $50 per barrel of crude used to calculate Russia’s 2016 budget was too optimistic, and ministers have in recent weeks warned of spending cuts and, potentially, “prolonged stagnation.” Oil prices slid below $30 a barrel last week before rebounding. 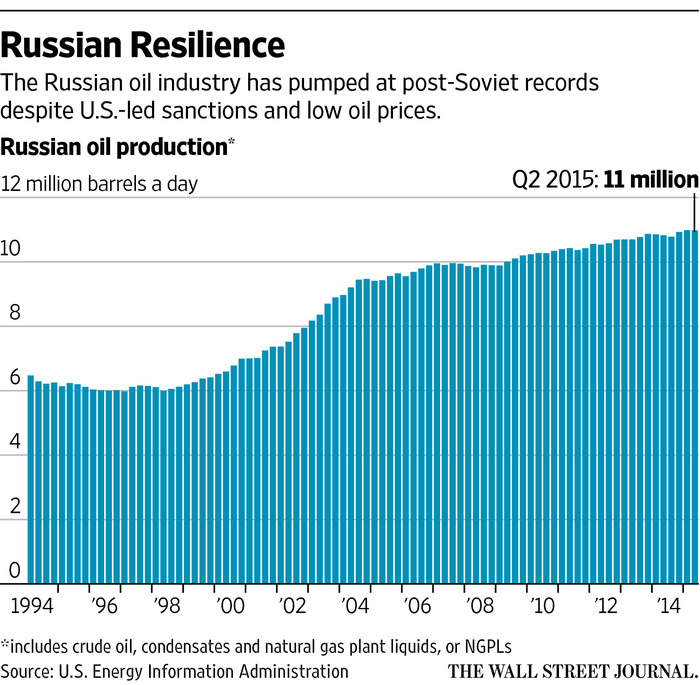 Russia’s energy revenues are also under threat from new competition in Europe, where it provides about a third of natural gas supplies. The first shipments of U.S. liquefied natural gas are expected to start arriving in Europe this spring, with the potential to weaken Moscow’s energy hold. Russian officials say U.S. gas will be too expensive to compete.

Few see an immediate threat to Mr. Putin. The U.S. and European sanctions successfully hobbled new sources of Russian oil production—the Arctic and shale oil—but have had little short-term impact on output. They were imposed in 2014, when oil prices were close to $100 a barrel and the worry was of global supplies falling short of demand.

China, not a party to the sanctions, sells Russia the supplies and equipment it needs to boost production at existing oil fields, such as here in Imilor, where rigs helped Russia last year produce 10.73 million barrels a day of oil and gas condensate, a type of ultra light crude, up from 10.58 million barrels a day in 2014.

Lukoil and state-owned OAO Rosneft—Russia’s largest producer—are flush with cash and generating sufficient funds to meet dividends, while some of their U.S. and European counterparts are struggling to cover spending and dividends. Some Russian oil company shares increased, even as profits fell, while Western energy companies’ stocks have generally declined.

Without new investment, Russia’s oil future is less bright. In West Siberia, where some two thirds of the country’s oil is produced, companies battle declining production rates after decades of oil extraction. “It’s unlikely we can stabilize production in West Siberia,” said Mr. Alekperov of Lukoil. “We can only slow the decline.”

The Russian Energy Ministry forecasts that national oil production will remain at current levels through 2035. The International Energy Agency, a Paris-based monitor of energy trends, expects Russian oil output to stop growing this year. By 2020, Russian oil production could fall to 10.5 million barrels a day, the IEA said, and sink to 9 million barrels a day by 2040.

“Russian oil production has been very resilient, but I don’t think we can have production forever at this level with low oil prices and sanctions restricting access to Western finance and technology,” said Fatih Birol, the IEA’s executive director.

Russian oil companies have benefited from three factors that may not last: an industry-friendly taxation system, cheap production costs and the devaluation of the ruble.

Ronald Smith, a Moscow-based oil analyst at Citigroup, said after-tax revenues from oil production have been “relatively stable in Russia because of the tax regime.” 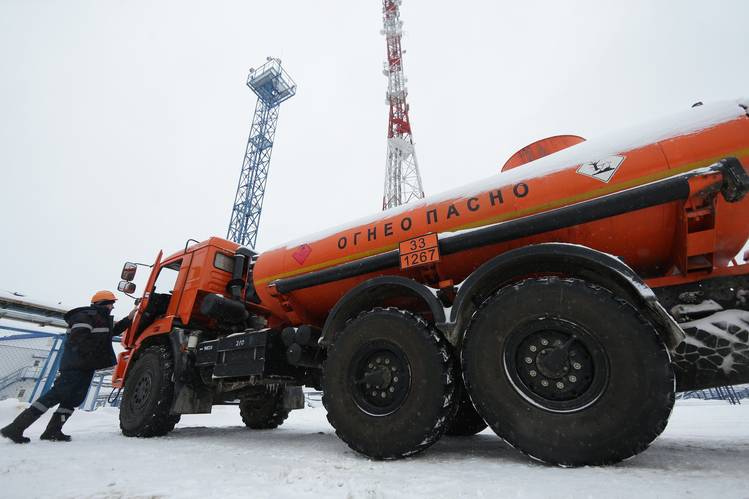 A tanker truck in the Khanty Mansiysk region of West Siberia in
Russia, where rigs account for just under half of Russia’s oil output.
Photo: Smirnov Vladimir/TASS/Zuma Press

The Russian government is considering tax changes the industry opposes. The finance ministry has said it could take an additional 200 billion rubles in taxes, about $3.6 billion, from the oil industry this year, mostly by temporarily abandoning plans to reduce export taxes.

Oil executives and Russia’s energy minister warned this could reduce investment and cause production to fall, especially if oil prices don’t recover and the government extends the measure into next year.

Some companies, however, are optimistic they can produce more because much of Russia’s oil is onshore, making it relatively cheap to pump.

Gazprom Neft, the oil arm of the state gas company, PAO Gazprom, can make a profit on oil extracted from existing fields even if the oil price falls to $15 per barrel, chief executive Alexander Dyukov told state TV in December.

Russia’s currency, the ruble, provided a lift for oil companies when it plunged in value after imposition of U.S.-led sanctions and the initial drop in oil prices in 2014. It has since largely risen and fallen with oil prices, touching a record low Thursday of almost 86 to the U.S. dollar. Before Russia invaded Ukraine, a dollar bought 35 rubles.

The devaluation of the ruble has slashed costs for an industry that generally sells its crude oil for dollars and pays its workers and buys equipment with Russian currency. Lukoil told investors in November that its costs for getting oil out of the ground had decreased by around a third in the first nine months of 2015, compared with a year earlier. The ruble depreciated about 40% over the same period, encouraging a switch to cheaper Russian suppliers.

“If before we could buy two Russian pumps for the price of one Western one, now we can buy four,” said a reservoir engineer working at one of Rosneft’s giant oil fields in east Siberia.

The savings has allowed Lukoil to increase its capital expenditure in rubles as U.S. and European oil companies reduced their spending by billions of dollars.

The extra rubles aren’t just buying cheap pumps. They have also helped fuel the burgeoning use of such Western technology as horizontal drilling and hydraulic fracturing in oil formations not targeted by sanctions.

Horizontal drilling last year made up about a third of all drilling in Russia, up from 11% in 2010, according to CDU TEK, the monitoring agency at Russia’s energy ministry. Such wells are drilled parallel to an oil or gas formation and can boost yields as much as five times that of a vertically drilled well. It is a technique that helped fuel the U.S. oil boom of the past few years.

“Russia was late to this,” said Sergei Alekseev, director of marketing at TMK, Russia’s largest manufacturer of steel pipes for the oil industry. “But now we see it everywhere.”

The technology has allowed Russia to squeeze more oil out of older fields across Russia and particularly in Siberia, where Lukoil is pumping at Imilor, but is only staving off the inevitable, executives said. Many of the big West Siberian oil fields have produced for more than five decades and yield less every year.

Output across the Khanty Mansiysk region, which includes Imilor and accounts for just under half of Russia’s output, fell 2.8% in the first 11 months of 2015 versus a 1.6% decline for 2014 overall, according to IHS Energy, a consulting firm.

At Rosneft’s Varyeganneftegaz division in West Siberia, oil production has fallen almost 6% in the first nine months of 2015 compared with the same period a year earlier. Rosneft posted a crude oil production decrease of 1% in the same nine-month period because of declines in older fields, despite new output from offshore projects and East Siberia.

Moscow had hoped the country’s vast shale oil would drive new production over the next five to 10 years, followed by the Arctic. Russian companies signed deals with Western firms to obtain needed technology and expertise.

Sanctions have largely put those plans on hold. In 2014, Exxon Mobil Corp. suspended exploration work with Rosneft in the Kara Sea in the Arctic, while France’s Total SA and Royal Dutch Shell PLC have halted plans to tap shale oil in West Siberia.

The sanctions could result in a loss of Arctic and shale oil production of around 1 million barrels a day by 2035, according to IHS Energy.

The U.S. and the EU say they will start removing sanctions once Russia fulfills a peace deal for eastern Ukraine and remove Russian troops. Russia has said it had no troops in Ukraine. The EU in December extended restrictions for another six months.

For now, Lukoil aims to bring its decline rate down to around 3% a year from around 5%. The company has been opening five to seven small fields a year in West Siberia, in addition to the more substantial Imilor field.

The new fields make sense to develop because they are in the heart of Russian oil country, with an existing network of pipelines, processing plants and other infrastructure, Mr. Alekperov said.

But they are tiny, he said, a drop in the bucket compared with what Russia needs to maintain current levels of oil production.