Analysts Say the Rally Is Likely to Be Temporary

The opening of a pipeline to ease a supply bottleneck at a key storage hub has boosted U.S. oil prices, but analysts say the rally is likely to be temporary.

Light, sweet crude for March delivery rose to $96.64 a barrel Friday on the New York Mercantile Exchange, ending the week with a 2.2% gain. It was the biggest weekly gain for U.S. oil futures in more than a month.

Crude began flowing through the southern leg of TransCanada Corp.’s TRP.T +0.10% pipeline last week, connecting the storage hub of Cushing, Okla., to refineries along the Gulf Coast. Supplies have been building up in Cushing, as innovations in drilling techniques increased U.S. oil production faster than the infrastructure could get it to refiners. Cushing is also the delivery point for the Nymex futures contract, and the large stockpiles there have depressed U.S. oil prices for years. 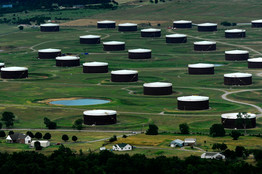 While some investors expect the opening of the long-awaited pipeline to clear up that logjam, analysts and traders say the project will only move the supply glut farther south because the refineries soon will shut down to perform seasonal repairs. And oil demand could remain tepid in the winter months, while domestic production shows no signs of slowing down.

“While the addition of the Keystone pipeline does move barrels from one point to another, it doesn’t increase consumption of crude at the refinery level, and it doesn’t add or subtract to the supply of crude that’s coming out of the ground,” said Tim Evans, an energy analyst at Citi Futures.

But James Cordier, president of Liberty Trading Group in Tampa, Fla., said now that the pipeline is running, it will relieve the buildup at Cushing.

“Just getting [more crude] out of there will support the price,” Mr. Cordier said.

The pipeline is expected to deliver 300,000 barrels of crude a day to the Houston area, before ramping up to 520,000 barrels before the end of the year. The project differs from Keystone’s 1,179-mile northern leg, which would transport heavy crude from Canada to Nebraska. TransCanada has yet to receive approval from the U.S. government for that pipeline, which environmentalists oppose.

Mr. Cordier, who manages $25 million in assets, is betting that U.S. oil prices will rise to more than $100 a barrel by April as supplies at Cushing dwindle. Crude stockpiles at the hub reached 41.6 million barrels in the week ended Jan. 17, the highest level since July.

By contrast, some analysts expect lower U.S. oil prices this year, with Deutsche Bank projecting Nymex crude falling to $88.75 a barrel, while Credit Suisse sees the U.S. benchmark sinking to $92 a barrel.

Factors such as market sentiment, U.S. crude production and the potential return of more Iranian oil to the global market could put a cap on U.S. oil prices, analysts said. The U.S. and its allies agreed to ease some economic sanctions against Iran in exchange for the country agreeing to curb its nuclear program.

In the third quarter of last year, investors took falling crude inventories as a cue to be bullish, even though it was a normal seasonal trend, Mr. Evans said. But when oil supplies fell as expected from November through January, traders shrugged it off, he said.

With the country awash in crude, analysts like Phil Flynn, at Price Futures Group, say the pipeline opening “will be a short-term fix” for oil prices.