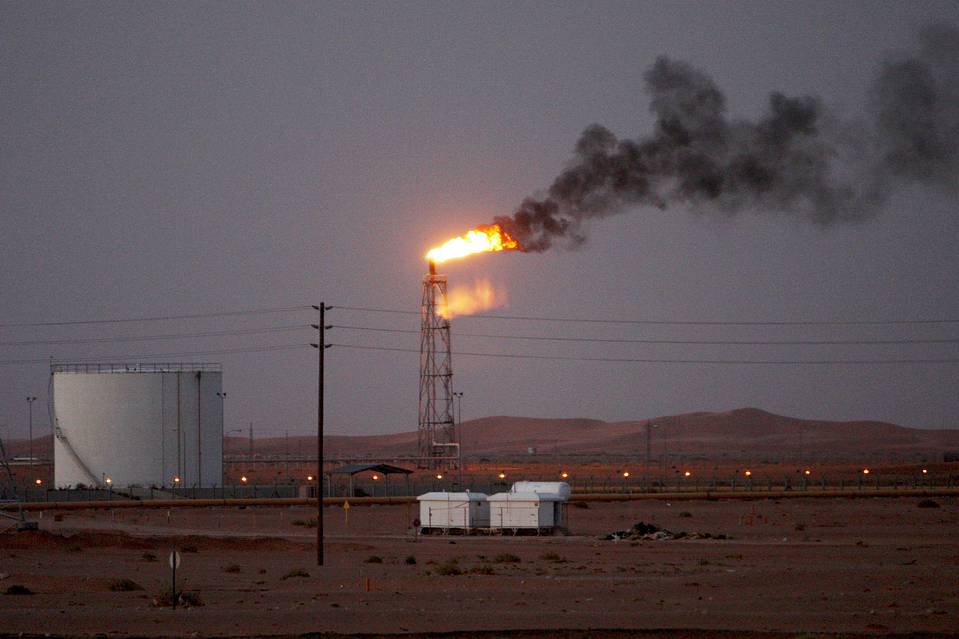 OPEC’s ability to ease the pain of an oil-supply shock is slipping.

For half a century, the Organization of the Petroleum Exporting Countries has buffered global crude markets, curtailing production to ease oil gluts and boosting output to prevent shortages.

Now, as it heads into a June 2 meeting to discuss how to stabilize world oil markets, the cartel has neither the political consensus to cut output nor the technical capability to significantly raise production.

Since last year, OPEC members haven’t been able to agree on supply cuts to stem a glut that drove prices down by more than 50% since 2014. Instead they kept pumping full blast. The result: With recent supply outages sending the oil price back up, the cartel has little flexibility to boost production.

This year, OPEC’s spare pumping capacity—the amount it can bring online within 30 days and sustain for at least 90—will be at its lowest level since 2008, the U.S. Energy Information Administration estimates. It said OPEC spare capacity will decline more than 22% in the current quarter compared with the previous quarter. 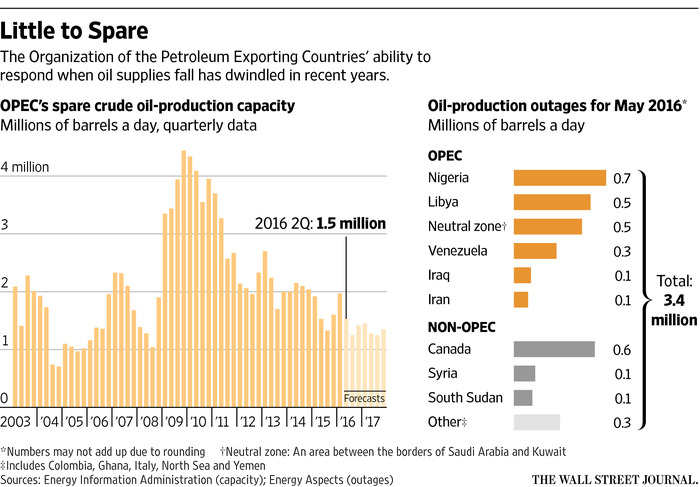 OPEC hasn’t been forced to tap its spare capacity to handle recent outages because oil was stored at record levels when prices were low, creating a cushion against supply shocks. As those stocks are drained and non-OPEC production falls, OPEC could struggle to meet demand.

By the third quarter of this year, the EIA said OPEC spare capacity will fall to 1.25 million barrels a day—a level not seen since 2008, when oil prices peaked at $147 a barrel on tight supply and surging Chinese demand.

The cartel’s ability to boost output rests mainly with its biggest producer, Saudi Arabia, which has historically held nearly all of the group’s spare capacity. Since oil prices began falling in 2014, the Saudi state oil company has cut investments in new production. New production it brought onstream has mostly offset natural declines in other fields, rather than adding much new capacity.

OPEC’s spare capacity is slipping at a time when supply disruptions in non-OPEC countries such as Canada and Colombia, as well as in violence-plagued OPEC member Nigeria, removed more than 3 million barrels a day from global oil markets this month.

OPEC’s ability to quickly boost supplies hasn’t been an issue for global markets since 2008.

Back then, surging demand from China and tight world-wide supplies drove crude prices up. Saudi Arabia boosted output, but with a counterintuitive effect: Instead of dropping, oil prices went up to $147 a barrel, triple 2007 levels. Analysts and traders said the spike was partly due to concerns about shrinking Saudi spare capacity, which fell to about 1 million barrels a day in 2008.

Prices fell with the global financial crisis, and the U.S. shale boom brought huge amounts of new production online. Chinese demand slowed, oil inventories built up, and in 2014 the price of oil began a long slide.

Until a few months ago, with prices below $30 a barrel and global oil inventories at a historic high, the notion that the world might not have sufficient oil production seemed far-fetched.

But a convergence of unrelated circumstances in Africa, the Middle East and North America tightened supplies. In Libya, a political crisis curtailed shipments. Oil thieves and saboteurs attacked Nigerian pipelines and wells. Workers went on strike in Kuwait and Canada’s oil-sands region went up in flames.

Now, the oil price is heading toward $50 a barrel and analysts say the supply disruptions may persist.

“Because it’s not down to a single outage, it’s harder to see when they could be resolved,” said Richard Mallinson of London-based consultancy Energy Aspects.

Canadian oil sands fires and Nigeria disruptions could cut into oil stockpiles that accumulated in North America in recent years. Elsewhere, stocks are growing slower than they have since the fourth quarter of 2014.

“Inventories may seem high now but if we get an outage somewhere of 1 million barrels a day for a period of three months, that’s 90 million barrels gone,” said Yasser Elguindi, an oil analyst at U.S.-based consultancy Medley Global Advisers.

Worldwide, there is little spare capacity beyond Saudi Arabia. Many of the world’s producers are pumping as much as they can to offset lower revenue from weaker oil prices.

Only the U.S.—with its onshore oil fields that are faster to drill than offshore reservoirs—has significant room to increase pumping. But the ability of U.S. shale producers to quickly ramp up output has never been tested, and the small U.S. companies that pump shale oil may need a higher oil price than other producers to make new wells worthwhile.

That leaves Saudi Arabia, with its cheap-to-pump reserves, as the most viable source of new production. Reaching the output of 12 million barrels a day that Saudi officials have said the country is capable of could require time-consuming drilling and development, analysts say.

“If Saudi has more than 10.5 million barrels a day of capacity, why have they never produced it?” said Raymond James analyst Pavel Molchanov.