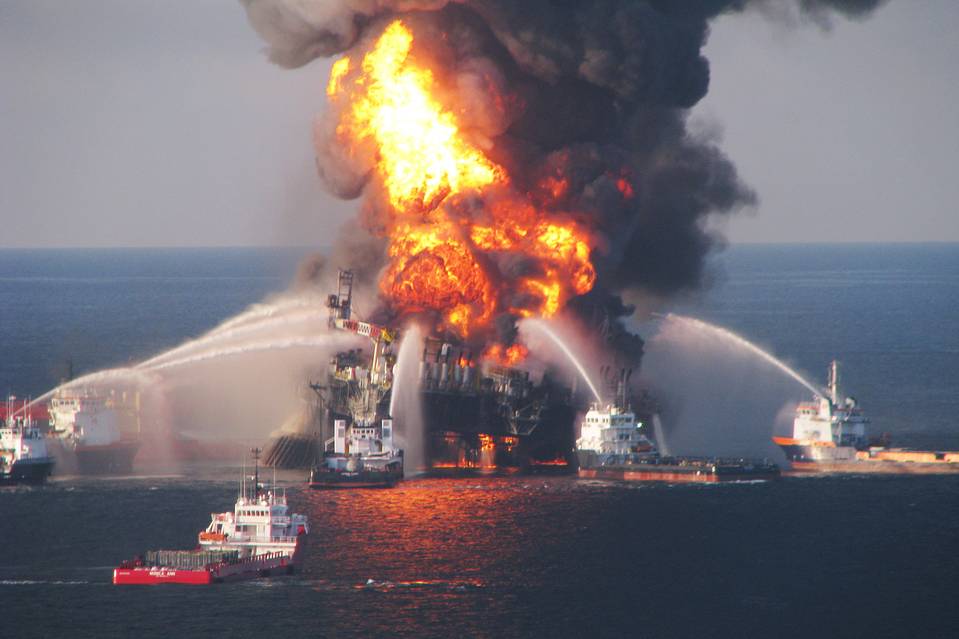 The scene of the 2010 Deepwater Horizon oil-rig accident in the Gulf of Mexico. Photo: Getty Images
By
Kurt Mix

At 6:30 a.m. on April 24, 2012, federal agents, wearing Kevlar vests and with guns drawn, raided my home in Katy, Texas, with a warrant for my arrest. This was as shocking to me as it would be for any normal, law-abiding citizen.

I’m not a drug dealer, violent criminal or money launderer. I’m an engineer. In 2010 I helped stop the BP oil spill after an explosion on the Deepwater Horizon drilling rig left a damaged well spilling crude directly into the Gulf of Mexico.

On the morning of the raid I left early for work, so I was not at home when it occurred. My wife was alone and had to deal with the shock of a squad of FBI agents ripping through our home. We’ve seen it a hundred times on “Law and Order.” They raced through our house and badgered and interrogated my wife.

Later that morning, after a frantic call from my wife, I drove to a local police station to surrender. As bad as that day was, I had no idea what was about to happen. I didn’t realize I had become a central focus of the Justice Department’s investigation into the BP oil spill. For the next three and a half years, a Justice task force was dedicated to putting me in jail.

What had I done to merit this? I had worked as hard as I knew how for nearly 90 straight days to help stop the Deepwater Horizon spill. Plugging the well, as fast as possible, was the focus of my life.

Looking back now at the Justice Department’s conduct, I realize that I made one egregious error: I naïvely believed that the task force simply wanted the truth. I was certain that once it had the full record of my actions, everything would be fine, and the trauma my family and I had gone through would end.

I was in for a rude awakening. Facts were not what the investigators wanted. They wanted a conviction. They wanted to prove to the public that their lengthy, expensive investigation was successful. And success meant conviction. I had banked on the truth saving me, but the truth was not enough.

I grew up fishing and duck hunting with my father in the marshes and coastal waters of Louisiana. I knew from the time I was in the eighth grade that I wanted to be an engineer. So when I was asked to help stop the spill, I was honored and deeply motivated. This was what I had prepared my whole life to do. I believed I could make a difference for my industry and home state.

And we succeeded. Lost in the aftermath of recriminations and lawsuits is the fact that the team charged with stopping the biggest offshore oil disaster in history did its job as fast and effectively as it knew how. This doesn’t in any way minimize the tragedy or the mistakes that allowed the spill to happen.

Nearly two years after the successful capping of the well, I was charged in May 2012 with two felony counts of obstruction of justice—potentially exposing me to up to 40 years in federal prison. My only previous exposure to the judicial system had been a speeding ticket. I didn’t even know what a grand jury was.

My case centered on the fact that I had deleted from my iPhone two extended text-message conversations, one of which was almost entirely personal; the other included personal texts as well as material related to our efforts to kill the well. I acknowledged from day one that I had deleted the texts. Any information related to our work, including flow-rate simulations, was fully addressed in the thousands of emails and documents I gave investigators. I was proud of my work, and I wanted anyone who was interested to have the full record of everything I did. I turned over more than 10,000 records, including files, memos and emails.

With the help of a forensic expert, I succeeded in recovering nearly all of the deleted text messages. I then voluntarily gave them to the Justice Department in September 2011, long before the indictment was returned. I certainly had meant no harm and thought that would be the end of it. I was wrong.

More challenges awaited. In spring 2013 my defense team discovered that prosecutors had failed to turn over evidence supporting my innocence. All three members of the Justice Department task force who had pursued me so relentlessly then withdrew from the case. So we started over in August 2013 with a new Justice Department team.

In late 2013 the case finally went to trial and I was acquitted on one charge of obstruction of justice. Although I was found guilty on the other charge, my attorneys and I soon learned that the jury forewoman had committed misconduct by introducing into the jury deliberations prejudicial, extraneous information overheard in a courthouse elevator about other BP cases. Based on this misconduct, a federal judge threw out the corrupted verdict and an appeals court affirmed that the verdict could not stand. The verdict was set aside and a new trial was ordered.

The case continued to grind on for two more years. Then to my surprise this fall, on the eve of my new trial, prosecutors offered a way to end the madness. They would drop all felony charges and acknowledge that I was not guilty of obstruction of justice. I would not pay a dollar in fines or serve a day in jail. I would plead guilty to a minor misdemeanor for deleting a set of text messages without BP’s permission—something I had acknowledged doing from the very beginning.

My initial instinct was to decline the offer. As minor as the misdemeanor charge may be, it is dispiriting that I should have to accept anything other than an apology. I did my job with honor and professionalism. I served the public’s best interests. For this, I was hounded for four years and threatened with up to four decades in a federal penitentiary. I agreed to this resolution on Friday to put this matter behind me—to protect myself and my family from any further entanglement with the criminal-justice system.

The dangers of a misguided, out-of-control Justice Department task force go far beyond my case. My life was turned upside down, but I will recover. What worries me more is the chilling impact this type of government overreach could have on first responders to future disasters. Will they rush in to help as I did? Or will they decline to get involved for fear of prosecution years later? If they do engage, will they spend all of their energy trying to solve the problem? Or will they be looking over their shoulders and building a record to protect themselves for the day the Justice Department comes calling?