Germany’s dependence on renewable energy is a bonanza for Gazprom.

Alaska’s Sen. Lisa Murkowski called on President Obama this month to lift the ban on exports of U.S. natural gas to Europe. For the sake of European independence, we can only hope the administration listens. 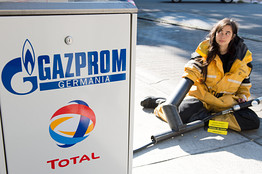 A Greenpeace activist trusses herself to a gasoline pump at a Gazprom gas station in Berlin on October 2, 2013 Agence France-Presse/Getty Images

Until the crisis over Ukraine, there was an inbuilt tendency in Germany to embrace closer ties with Russia. Former Chancellor Gerhard Schroeder is close to Vladimir Putin (he has compared Russia’s intervention in Ukraine to NATO’s action against Serbia in the 1990s) and is chairman of the board of Gazprom OGZPY +4.64% joint-venture pipeline company Nord Stream. In 2012, Russia piped 30 billion cubic meters of natural gas to Germany, accounting for 28% of the 105.5 billion cubic meters of gas delivered to the European Union.

Friendships aside, the most significant driver of German energy-related foreign policy has been its powerful Green Party. Other countries considering letting domestic or foreign policy be determined by environmentalists would do well to consider where Germany’s embrace of environmentalism has led.

Germany’s Greens first emerged as a political force at the end of the 1970s at a time of acute East-West tension. In response to deployment of Soviet midrange SS-20 missiles, NATO decided to station Pershing missiles in Germany. Massive, sometimes violent, demonstrations against nuclear power and nuclear missiles swept Germany. Whether consciously or not, the protesters were doing the Kremlin’s work in trying to split the Atlantic alliance.

The protests turned the German left into the voice of radical environmentalism—a historical shift. Old Nazis and neo-Nazis had been the bearers of Germany’s culture of ecological politics, which had been marginalized with Hitler’s defeat. German environmentalism was antidemocratic and anticapitalist. The Nazis were Europe’s greenest party, passing laws to extend protected forests and banning animal vivisection while performing hideous experiments on human beings.

In October 1980, Germany’s Green Party was formed to stand in parliamentary and state elections. Eighteen years later it entered government in a Red-Green coalition with the left-of-center SPD and in 2000 successfully pushed for the gradual phaseout of nuclear power.

The Greens’ biggest triumph came with Germany’s adoption of its Energiewende, the transition to renewable energy. The policy is a long-term bonanza for Gazprom. It means that Germany will buy more and more Russian gas because it cannot depend on electricity from unreliable wind and solar to power its industries and keep the lights on.

The emergence of the Greens has had a huge impact on German and European politics. But not all of Europe is so enthusiastic or willfully naive about dependence on Russian gas. Some countries are looking to America for alternatives.

Russia supplies around one third of the EU’s gas, but the proportion rises the farther east you go. The Baltic states and Bulgaria buy all their gas from Russia. In the middle are Poland, the Czech Republic, Slovakia and Hungary, dependent for 50% of their gas on Russia. Those countries, acting as the Visegrad Four, have opposed German attempts (which are supported by Britain and France) to institutionalize aggressive decarbonization policies across the EU.

There are now more than a dozen pipelines supplying Europe with Russian gas, and as gas prices are mostly indexed to the world price of crude oil, the price of that gas has risen sharply. Yet President Obama dithers over approving the Keystone XL pipeline and is passive in response to European appeals for American gas.

Opening up European markets to American gas would help shake Gazprom’s hold on those countries most dependent on Russian supplies. Mr. Obama needs to face down the greens in his own party and open up North America’s abundant oil and gas reserves to the world.