Energy Industry Is Gassing Down

Collapse of oil and gas prices has producers rethinking output 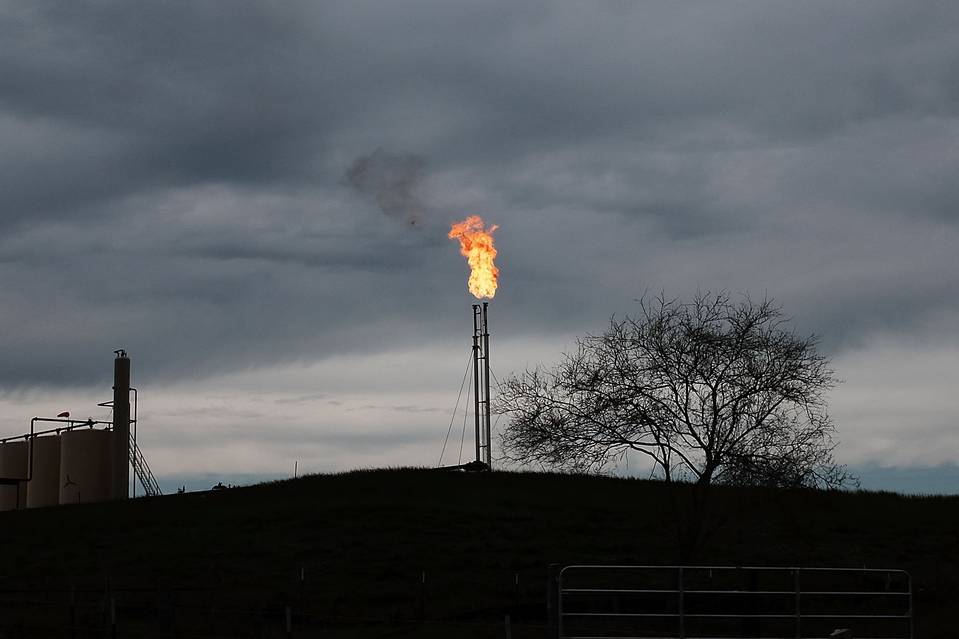 Natural gas is flared off at a plant outside of the town of Cuero, Texas. Photo: Spencer Platt/Getty Images
By Timothy Puko

U.S. energy companies are taking their foot off the natural-gas pedal, slowing down their production growth after years of furious pumping.

In the past eight years, a combination of improvements in drilling techniques and high energy prices stoked natural-gas production to all-time highs. The boom quickly sent natural-gas prices to historic lows, but output kept rising because high oil prices made it profitable for producers to keep tapping fields that yielded both oil and gas.

Now, the global collapse in oil prices has producers and analysts rethinking the gas boom, too. Both gas and oil prices are down about 40% in the past year, cutting the incentive to keep drilling. A flurry of recent forecasts from government and private-sector experts suggest monthly gas production will flatten and possibly even begin to decline in 2015.

Energy companies have shut down more than half of all their oil rigs and cut back on the number of gas rigs to their lowest level in the 28-year history of rig counts from Baker Hughes Inc.

The natural-gas market has started to respond to these forecasts. Last month, natural gas briefly went into a bull market, defined as a gain of 20% off a recent low. Prices fell from there, but another recent surge has kept futures up 16% from a three-year low hit on April 27, though prices remain unchanged year to date at $2.889 a million British thermal units. Higher prices are likely later in the year as production growth slows and heating demand kicks in, bullish investors say.

The gas boom accorded widespread benefits to the U.S. economy. U.S. families have paid less to heat their homes, steel and glass makers saved money running their furnaces and petrochemical producers have saved money on materials to make plastics.

Those benefits won’t fade quickly, even if gas output declines, because production is still likely to overwhelm demand for most of 2015, economists and analysts said.

Natural-gas producers have defied predictions of slowing output growth before, and they would probably get back to work quickly if either gas or oil prices embarked on a sustained rally.

But some analysts say the current downshift in natural-gas production is more widespread than in previous slumps.

“The big fat difference is that [drilling] activity is down in every corner, from every entity that you can think of,” said Jan Stuart, global energy economist at Credit Suisse.

Mr. Stuart’s estimates indicate that U.S. gas output hit an all-time peak in December and will decline throughout 2015. Department of Energy data released at the end of May showed natural-gas output growth in the first quarter at its slowest since the fourth quarter of 2013.

“If you believe that U.S. oil production is peaking, then you would see a similar knock-on impact to gas,” said Greg Sharenow, a portfolio manager at Pacific Investment Management Co., one of the firms to bet on rising prices later this year. “It’s the same companies and the same economics being challenged from both sides.” Pimco has about $20 billion invested in commodities. 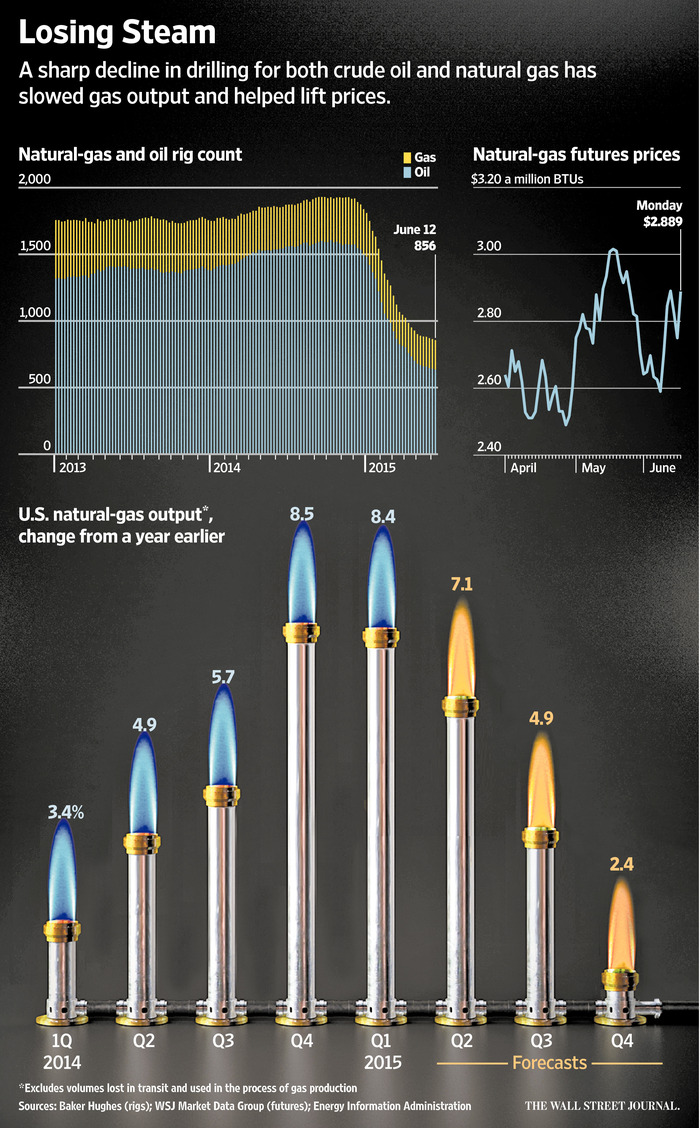 The U.S. benchmark oil price is up 12% this year, in part on the prospect of slowing U.S. crude output due to reduced drilling activity.

Range Resources Corp. of Fort Worth, Texas, and Chesapeake Energy Corp. of Oklahoma City, two companies that helped pioneer shale-gas drilling, cut their growth targets for this year, citing the broad collapse in energy prices, including for oil and other similar liquid fuels.

Production hit 73.6 billion cubic feet a day in the first three months of the year, a quarterly increase of 0.3%, the smallest since the end of 2013, according to the U.S. Energy Information Administration.

In its monthly short-term energy outlook, the EIA said gas production is likely to keep increasing and set a new monthly record by July, which differs from Credit Suisse’s estimates. In the same report, though, the EIA also said it cut its output forecast for every quarter through the end of 2016.

“At a minimum [production] will at least stabilize,” said Nick Koutsoftas, a co-portfolio manager at Cohen & Steers, which has $54.6 billion in assets under management. “You could see a market that’s balanced or at a slight deficit going into 2016, ’17 and even ’18.”

Mr. Koutsoftas has a bullish position in natural-gas futures for delivery later in 2015.

There are many factors that could keep output growing in addition to a recovery in energy prices. Producers are negotiating cheaper contracts with service providers to match lower prices, which could keep volumes buoyant.

“We’re not going to look back in two or three years and think 2015 is when the tide turned,” said James Smith, an economist at Southern Methodist University and president-elect of the U.S. Association for Energy Economics “There is a massive resource to be exploited.”

Still, production cutbacks under way have already been enough to turn stalwart bears into bulls. Analysts at Tudor, Pickering, Holt & Co., a Houston investment bank, recently turned bullish on gas prices in March for the first time in six years.