The de facto ban on exports should have been stopped long ago. Now world events demand it.

Russia has been playing a much more intricate game than the United States in recent years. The resulting imbalance has created a growing threat to global stability, as evidenced last week by Vladimir Putin’s invasion of neighboring Ukraine. The ability to turn the tables and put the Russian leader in check lies right beneath our feet, in the form of vast supplies of natural energy.

Under Mr. Putin, Russia has expanded its military and tightened its grip on its neighbors by aggressively making the most of its vast resources, exporting oil, coal and natural gas in massive quantities to Europe and elsewhere. Russia’s neighbors need large quantities of natural gas—and, currently lacking a better option, they buy much of it from Russia. This dependence has diplomatic repercussions, making them more reluctant to challenge some of Mr. Putin’s arrogant actions.

Mr. Putin’s scheme assumes that the U.S. will continue to sit on its own natural resources instead of engaging Russia in the global energy marketplace. 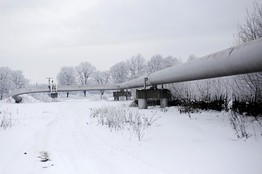 The U.S. has abundant supplies of natural gas, but in stark contrast to Russia, the amount of natural gas we produce and export barely scratches the surface of its potential. That’s attributable in large part to the U.S. Department of Energy, which maintains an approval process that is excruciatingly slow and amounts to a de facto ban on American natural-gas exports—a situation that Mr. Putin has happily exploited to finance his geopolitical goals.

According to the Energy Department’s own website, only six applications for U.S. exports of liquefied natural gas (LNG) have been approved over the past three years, while 24 applications are pending. This means Washington is doing as little as possible in an area in which we should be doing the opposite. Consequently, our allies in Europe and elsewhere have little choice but to turn to Russia for their energy needs.

These policies have amounted to our nation imposing economic sanctions on itself—sentencing consumers in the U.S. and abroad to higher prices and slower growth while ceding the international energy marketplace to countries such as Russia, Venezuela and Iran.

In response to Mr. Putin’s aggression in Ukraine, President Obama should announce a series of steps that will dramatically expand production of American-made energy, beginning with lifting this de facto ban on exports of U.S.-produced liquefied natural gas. Taking this step would also create American jobs and lower prices for our consumers and small businesses when coupled with other moves that would bolster energy production in North America. These include construction of the Keystone XL oil pipeline, ending the Obama administration’s embargo on our supplies of oil and gas from federal lands and waters, and halting the effort to take coal out of America’s electricity generation mix.

The president doesn’t need legislation from Congress to make these changes. This is something the commander in chief can do right now in the face of Mr. Putin’s aggression. It would also provide much-needed evidence that the president’s State of the Union commitment to an “all of the above” energy strategy is real, and not just poll-driven rhetoric.

America not only has a right to develop and market its natural resources. In the face of rising danger, it has an obligation to do so.

Mr. Boehner (R., Ohio) is the speaker of the House of Representatives.