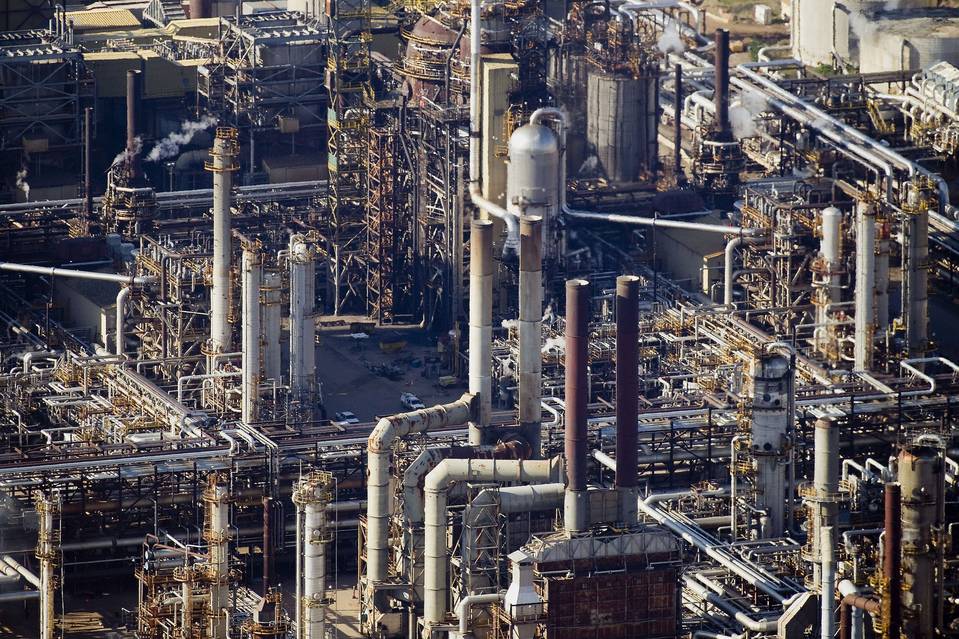 The new left-leaning government of the Canadian province of Alberta, which came to power in May after 44 years of conservative rule, has announced it would cap carbon emissions from its oil-sands industry, a move that threatens to strand billions of barrels of crude from supplies so vast that only Saudi Arabia and Venezuela control more.

Nine of the world’s top oil companies, including Exxon Mobil Corp. , BP PLC, Chevron Corp. , ConocoPhillips and Royal Dutch Shell PLC, have invested tens of billions of dollars into megaprojects in the province’s boreal forests. Combined, those operations account for 23% of these companies’ proven crude reserves, according to data from investment bank Peters & Co.—up from only 5% in 2006.

Marathon Oil Corp. , China’s Cnooc Ltd. , Total SA of France and Norway’s Statoil AS A round out the group of global players exploiting Canada’s oil sands.

Most of these producers have taken a wait-and-see approach toward the cap, details about which remain to be worked out. Privately, executives at some oil multinationals with oil-sands assets express dismay about the sudden policy shift, and the heads of some smaller companies have voiced their concerns publicly. 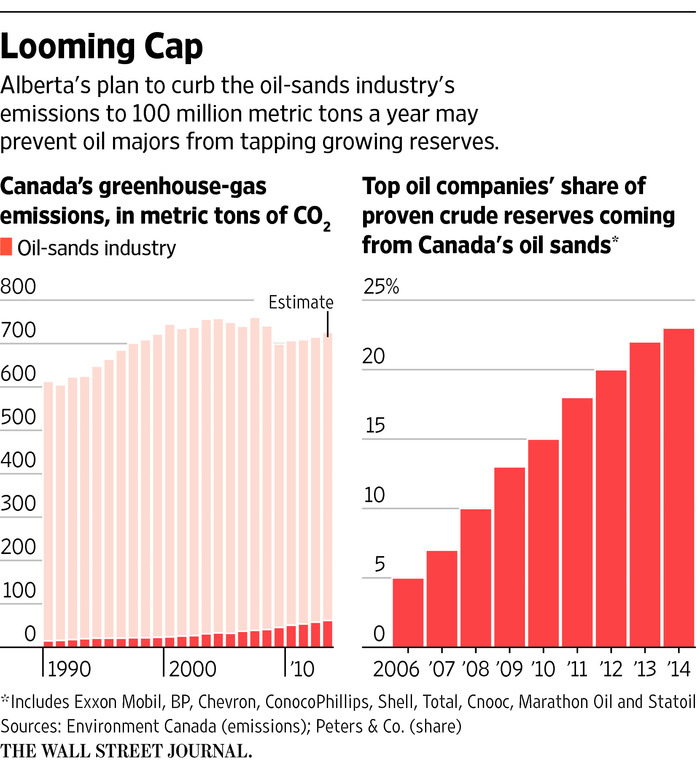 “The cap is a long-term issue for province and the country,” said Glen Schmidt, chief executive of Laricina Energy Ltd., an oil-sands lease owner. “How will it be allocated to companies who in good faith have purchased rights to produce and invested in technology as we have?” he said.

Canada’s federal government defers to its provinces to come up with policy prescriptions to curb overall emissions. Alberta’s new climate plan, announced in November, would cap its oil-sands industry’s greenhouse-gas emissions at 100 million metric tons a year. The industry currently emits 70 million metric tons of greenhouse gas a year—about a quarter of the province’s overall emissions.

Based on growth projections at the time, Canada’s environment ministry said in December of 2014—the latest projection available—that the oil-sands industry is likely to cross that 100 million metric-ton level as soon as 2020.

Shell, which welcomed the policy along with three local Canadian oil-sands producers, said it didn’t expect the cap would have a negative impact on its existing operations or force it to take impairments related to its undeveloped reserves. The company said it is confident the advent of new technologies and other policy initiatives would mitigate the impact of a carbon cap.

Oil majors have increasingly been turning to Alberta, helping boost Canadian oil-sands production by 38% over the past five years. Companies such as ConocoPhillips, Exxon and Shell have booked more than one-third of their proven crude reserves from the oil sands, according to the Peters report. Most other known untapped crude reserves are owned by state-owned firms in top oil-producing countries and are largely off limits to private companies.

Oil firms’ proven reserves are an important indicator of their ability to grow. Canadian heavy crude may be expensive to extract, but companies point out that other potential sources such as Arctic or deep-water offshore fields are also high cost and, unlike Canada’s oil sands, would require extensive exploration to find and substantiate crude oil deposits.

Despite low prices, oil-sands production is expected to increase through 2020 as a result of expansion projects approved years ago. Oil-sands developments cost billions of dollars and take years to build, but produce at stable levels for a decade or more—unlike short-lived shale-oil wells.

Exxon said last year that 2014 marked the 21st consecutive year it replaced more than 100% of its production. More than half of its newly booked crude reserves—amounting to some 700 million barrels—came from oil sands assets in Canada, it said.

However, the recent crude slump—with oil prices hovering around $30 a barrel—has hit producers’ bottom lines and forced many to abandon or suspend development of new projects. Western Canadian heavy crude costs more to extract than other oil sources because it must be separated from deposits of sand and trades at a discount to other crudes, in part because of the distance it must be transported from remote boreal forests in Alberta. It also is among the most greenhouse gas-intensive to produce. It also trades at a discount: On Friday, Western Canada Select crude oil closed at 25.74 Canadian dollars (US$18.12) per barrel.

The prospect of Alberta’s carbon cap looms large because it could thwart development even if oil prices rebound.

The policy presents a real-world test case in a much broader debate now raging among investors and resource companies: Whether a more concerted global effort to reduce greenhouse emissions could keep companies from fully exploiting their resources, diminishing their value to shareholders.

The debate has gained new traction amid the run-up to the Paris climate change accord last month, during which 195 countries united around a document that is effectively a blueprint for how the world will tackle global warming.

Oil industry executives have dismissed the idea that they will be forced abandon undeveloped assets, noting fossil fuels will remain an important energy source for decades to come.

Current volumes of proven crude reserves aren’t likely to be affected by Alberta’s cap since they reflect projects that already have regulatory approval, most of which are operating or under construction. But companies may find it harder to tap their vast quantities of contingent resources.