A shrewder President would use it to reduce Putin’s influence.

The U.S. has more responses to Vladimir Putin‘s adventure in the Crimea than the no-options caucus suggests, including a few that weren’t possible even a few years ago. Namely, a President with a keener strategic mind would unleash North American oil and gas on the world.

The Putin regime controls the taps for as much as a third of Europe’s natural gas imports, including half of Ukraine’s and 39% of Germany’s. The European Union is less dependent now on the trans-Ukraine pipeline system than it was when Russia choked back supply in 2006 and 2009, but the U.S. oil and gas revolution could continue to shift the balance of energy power.

Begin by approving the Keystone XL pipeline. The $5.3 billion, 1,179-mile project would pump 830,000 barrels of crude oil per day from Alberta to Oklahoma interconnections and then on to Gulf Coast refineries. Canadian oil producers and U.S. drillers on North Dakota’s Bakken Shale need more access to these refining markets, where they can displace higher-priced overseas oil imports. 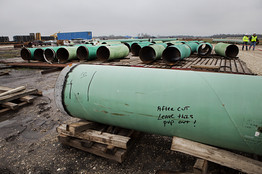 The economic and even environmental case for the Keystone has been clear for more than five years, as the State Department’s multi-volume studies attest. The project is currently under a 90-day State-White House review under the pretense of determining if it is in the national interest, as if that is in question. But after the last week, the strategic case for approval is even more obvious.

An added benefit is that by disappointing his climate-obsessed financiers, Mr. Obama might restore some of his international credibility. If he won’t defy San Francisco billionaire Tom Steyer, why would anyone think he’ll confront a thug like Mr. Putin?

A President less sentimental about energy politics would also expand America’s oil and gas trade. This year U.S. petroleum exports will reach a six-decade high and could be increased much more. The U.S. retains a ban on crude oil exports from the 1970s energy crisis, and this is becoming a problem for the “light tight oil” extracted from the Bakken and Eagle Ford formations. Domestic refiners are more geared toward heavy crude, and the mismatch is creating a backlog and thus less production.

Alaska Republican Lisa Murkowski of the Senate Energy Committee and Speaker John Boehner say the executive branch has the statutory authority to waive the export embargo, and Presidents of both parties have done so since the 1980s. Mr. Obama could set the ban aside with an executive order in the national interest.

A serious President would also fast-forward permits on new liquefied natural gas terminals that could ship to Europe. The EU wants unlimited U.S. LNG exports as part of the EU-U.S. trade negotiations. The U.S. has surpassed Russia to become the world’s largest gas producer as supply outstrips domestic demand, and exporting more would be a win for the U.S. economy and global interests.

The obstacles are greens who oppose anything that expands the fossil-fuels market, while some big business leaders and protectionists fret about higher domestic prices. The Energy Department is bowing to these opponents in the name of what it calls “the public interest” by processing LNG applications “case by case,” which is the bureaucratic term for forever. More than 20 cases have been pending for over a year, with only six approvals since 2011.

The economic reality is that exports—for crude oil and natural gas—create incentives that stimulate more drilling and thus more jobs and income. As global supplies increase, global prices are more likely to decrease. The geopolitical case is now overwhelming.

Cheap, abundant American resources have helped lower global prices and reduce volatility, and this strategic asset could be turned to increase the pressure on Mr. Putin. He feeds his kleptocracy and client states with petro dollars. U.S. exports would reduce the threat of energy blackmail, and if they reduced global oil prices they’d reduce his influence.

Exports help domestic growth and strengthen ties with allies, as a President more attuned to America’s place in the world would already have recognized. The question is whether Mr. Obama will continue to let his green donors trump U.S. economic and strategic interests.